The slurry (1) of ground ore and lime moves into a series of six leach tanks (2) where a sodium cyanide solution is added. The tanks provide sufficient retention time to allow the gold and silver to be dissolved by the cyanide solution. Oxygen is added to assist in this process. 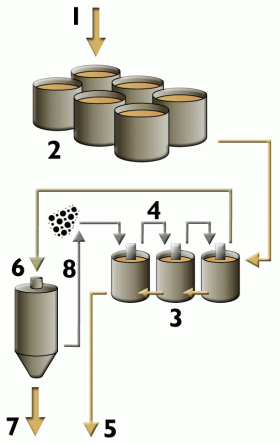 The slurry then moves through a series of carbon adsorption tanks (3). While the leaching process continues in these tanks, the primary objective is to rem

By the time the slurry reaches the final adsorption tank, most of the precious metals have been removed. The barren slurry, now known as tailings, is pumped to the tailings storage facility (5). In contrast, by the time the carbon reaches the first adsorption tank it has recovered most of the gold and silver from solution. This ‘loaded’ carbon is then pumped to the elution circuit (6) where the gold and silver is washed off with superheated water. The washed solution, called pregnant eluate, is passed to the electrowinning circuit (7). The remaining barren carbon is reactivated by acid washing and kilning and returned to the adsorption tanks (8).